In looking at Word Trends, we examined how frequently words appeared between the two volumes.

We focused on the relationship between love and sex. These two terms, which are so often paired together when thinking about poetry, have an inverse relationship within Duffy’s work.  When love appeared frequently, sex did not.  This is probably due to the fact that “love” is used in a platonic sense in Mean Time, while not World’s Wife, where “sex” was used more often. In Mean Time, which largely focused on memory, love appeared frequently, referencing  the platonic love of youth. However, sex, which appeared frequently in The World’s Wife, was often used in a passionless manner.

Even though each book discusses different themes, the term “eyes” show up to a consistent degree in both volumes. This reveals that Duffy, although talking about different topics, still uses consistent objects to get her argument across.

The word “like” (shown in the graph) shows up more in Mean Time, usually used in similes. This indicates that Mean Time uses more figurative language.

Taken on its own, this information is not entirely telling. This only shows differences in terms of actual word usage. It does not acknowledge stylistic differences or differences in meaning.

However, when we bring what we have discussed in class to the table, these discoveries take on greater meaning. 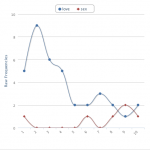 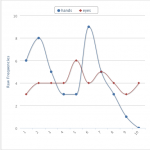 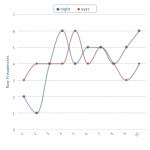 @briancroxall: And yes, that post does mention my #389dh class favorably, but don’t hold that against the conversation about DH pedagogy as emergent MOOC.
93 months ago
@briancroxall: I've just learned that my poster session about #389dh and the Duffy project has been accepted for #dh12. Hamburg, here I come!
108 months ago