Excel as a tool to analyze poetry

Posted: December 8, 2011 | Author: Reina Factor | Filed under: Student Posts | Comments Off on Excel as a tool to analyze poetry

While the two works of Carol Ann Duffy, The World’s Wife and Mean Time, appear to be different from a qualitative perspective, there also appears to be a difference in examining the texts quantitatively.  By entering the words counts, character counts with and without spaces, lines per stanza, and other features of the poem and calculating their averages in Excel, we were able to find differences and similarities in the two works.  This is expected because by pure length, The World’s Wife is a much longer work thanMean Time.  This is somewhat surprising since one would expect the words to be longer.  Most significantly, the average number of words varies between the two works.  In Mean Time, the average is 183 words per poem, while in The World’s Wife, there are 350.6 words per poem. Therefore, this indicates that Mean Time has more concise poems than The Worlds’ Wife.  Therefore, brevity may result in more poignant and focused poetry in Mean Time.  Interestingly, the average number of characters per word is 4 for both works, signifying a similar writing style in word choices for the two works.

In examining the average number of lines per poem, the average is 23 for Mean Time, while there is a higher average, 53 lines, inThe World’s Wife.  This suggests that the poems are more concise in length in Mean Time, although there are more poems in this collection.  Further, the length varies more in The World’s Wife, as some poems, such as “The Devil’s Wife” is a number of pages, while “Mrs. Darwin” is only a few lines.

In conclusion, by utilizing the tools available in examining Duffy’s two texts from a digital humanities lens, we are able to illuminate more of the differences between the two works and understand her poetry from a different perspective. 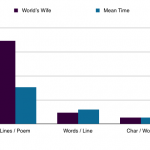 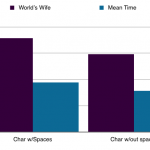 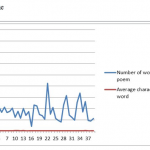 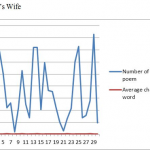 @briancroxall: And yes, that post does mention my #389dh class favorably, but don’t hold that against the conversation about DH pedagogy as emergent MOOC.
80 months ago
@briancroxall: I've just learned that my poster session about #389dh and the Duffy project has been accepted for #dh12. Hamburg, here I come!
95 months ago